Simultaneous interpretation is becoming a much more common practice, as the migratory flows are getting bigger every day. These trends are especially important in Southern states of the US, where the proportion of non-English speakers is bigger than in other states. As we are located in Florida, we understand that there is a growing demand for these services, and we intend to keep up with the raising standards of the public.

From Enersound we provide solutions for five different areas: Assistive Listening, Conferencing, Tour Guide, Portable Sound and our core business, Language Interpretation, providing several options depending on the needs of the client.  We serve various industries including but not limited to legal, government, non-profit, education, houses of worship, hospitality and tourism,   corporate, language interpretation and audiovisual services.

When it comes to language interpretation in the courts, there are some specific key aspects to have in mind. The use of competent federal court    interpreters in proceedings involving speakers of languages other than English is critical to ensure that due process is carried out fairly for defendants and other stakeholders. The professional knowledge, skills and abilities required of a federal court interpreter are highly complex. Communication in courtroom proceedings may be more complex than that in other settings or in everyday life. For example, the parties involved may use specialized and legal terminology, formal and informal registers, dialects and nuances of meaning.

Not only this, but the type of technology selected could impact severely in the quality and accuracy of the interpretation. Although there are several technologies to choose from, for the legal system we recommend one specific type of technology because of its price, reliability and convenience of use: FM (Frequency Modulation) Analog Technology. There are several features that make this technology ideal for simultaneous interpretation:  Its easy set-up, lower cost and minimal required system components.

A typical translation system for a courtroom consists of a wireless transmitter and microphone for the interpreter and wireless receivers with headphones for the LEPs (limited English proficient). A LEP individual is one who does not speak English as their primary language and who has a limited ability to read, speak, write, or understand English. This language interpretation system can be expanded by adding as many receivers as needed within the transmitter’s coverage area (150 to 1500 ft depending on the type of transmitters and antennas). 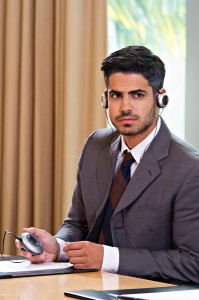 In the US and throughout most of the Americas the most popular frequency band range for language interpretation is 72-76 Mhz. This frequency band is approved in the US by the FCC for language interpretation and assistive listening and is out of the range of commercial FM radio stations, wireless microphones, tablets, etc., minimizing possible interference.

As for legislation pertaining language interpretation, under Title VI of the Civil Rights Act of 1964 (Title VI), government, private, and non-profit entities that receive federal funding must comply with Title VI and the Title VI implementing regulations, which prohibit discrimination on the basis of race, color, and national origin in programs that receive federal financial assistance.  To comply with the Title VI prohibition against national origin discrimination, Federal funding recipients must take reasonable steps to ensure meaningful access to their programs.

On 8/11/00, President Clinton signed Executive Order 13166, Improving Access to Services for Persons with Limited English Proficiency, which directed federal agencies to publish guidance on how their recipients can provide access to limited English proficient (LEP) persons.  On 6/18/02, the Department of Justice (DOJ) issued final guidance to federal fund recipients regarding the requirement under Title VI and the Title VI regulations to take reasonable steps to provide meaningful access to LEP individuals.

Our Enersound simultaneous interpretation equipment assists court interpreters working at both state and federal courts so that they can overcome language barriers in the courts. At the same time, the courts ensure they are providing individuals with limited English proficiency access to the courts, which is a core function of the courts. When it comes to services in the court, interpreters usually use battery-operated FM wireless transmitters with microphones, and they interpret what´s being said in real time in the simultaneous mode. Our equipment is very lightweight and portable, and allows linguists to move around the courtroom if needed.

Mrs. Linda Dunlap, a freelance Spanish interpreter Certified by the Supreme Court of Florida, and President of the Association of Translators and Interpreters of Florida (ATIF), works as an interpreter for Florida Courts, and reports the enormous advantages of having interpretation equipment in order to fulfill her duties. She tells us that a few years ago, on her first court assignment, she found herself in court having to speak to three plaintiffs in simultaneous mode.  Being expected to speak softly enough not to interfere with the proceedings but loudly enough for the plaintiffs to hear, she immediately saw the need for equipment.

She tried several and purchased one by Enersound. She reports that “since that time, I have learned to keep my equipment close at hand, as I never know when I’ll be called in to work in court. The equipment I use is easy both to wear and to carry with me and it allows me to move about as needed (and those using the receivers can do the same). Clients have been very pleasantly surprised with the sound quality and often remark that they didn’t expect it to be of such a high quality”.

Compared to other options, our SI systems are not only of the highest quality, but are also cheaper and easier to install as they require fewer components and are easier to transport. In addition, our multichannel systems enable a great number of channels/ frequencies to be used simultaneously, for example, when witnesses or defendants, who speak different languages, are called on the stand. There is also the possibility of adding as many receivers with headphones as needed with one single transmitter for high profile cases attracted by large audiences.

All these features turn into substantial savings of precious time and money.