Simultaneous Interpretation occurs when an interpreter listens to the original message (source language) and relays it in another language (target language) with very little delay.
Typically, simultaneous interpretation requires the assistance of special equipment where the interpreter speaks into a microphone that is either connected into an interpreter console or directly to a wireless FM or infrared transmitter, while each participant in the audience uses a wireless receiver with headphones tuned into the appropriate channel for the language they choose to hear.

Do Enersound language interpretation devices automatically translate from one language to another?

No, they don’t. These devices require a professional interpreter with understanding of the context to perform the language interpretation.

What is the difference between FM and IR technology? Is one better than the other for simultaneous interpretation?

FM (frequency modulation) systems are the most popular equipment for simultaneous interpretation for their easy set-up, lower cost and minimal required system components. In the US and in most of the Americas the most convenient frequency band range for transmitters and receivers is 72-76 Mhz. These frequencies are out of the range of commercial FM radio stations, consequently, requiring special FM equipment. The coverage range is between 150 and 1500 feet depending on the transmitters and antennas. These language interpretation systems can be expanded by adding as many receivers as needed, the only limitation being the coverage area of the transmitter. FM systems can pass through walls. FM systems require one transmitter per language. FM transmitters can be portable (also called tour-guide transmitters) and run on batteries and stationary transmitters (also called base or table transmitters) are mostly used for events at fixed locations that does not require the interpreter to move around. Stationary transmitters typically allow for up to six interference-free simultaneous languages in one room in the frequency range of 72-76 Mhz.
IR (Infrared) systems are frequently used for confidential meetings since IR signals don’t pass through walls, and/or when there is a need to use more than 6-8 languages in one room. IR systems require at least one IR transmitter (modulator), as many IR radiators as needed to cover the desired area and IR receivers. This technology is similar to the one used with remote controls. The transmitter, radiators and receivers should be in the line of sight. This means that you need to carefully mount sufficient radiators in the room to cover the whole area. Larger areas require more radiators. Some infrared systems require additional radiators depending on the total amount of channels (languages) to be used. In the case of infrared systems, generally only one multi-channel transmitter (modulator) is required per system.
Whether infrared or radio frequency is better for you, depends on how, why, and where you’ll be using the equipment. For most applications including but not limited to meetings and conferences, religious services, guided visits, tours of factories, training sessions, corporate events, etc., FM technology will be more appropriate. Whereas infrared can be better in some highly confidential environments such as classified military meetings and when more than 6-8 languages are required in one same room. 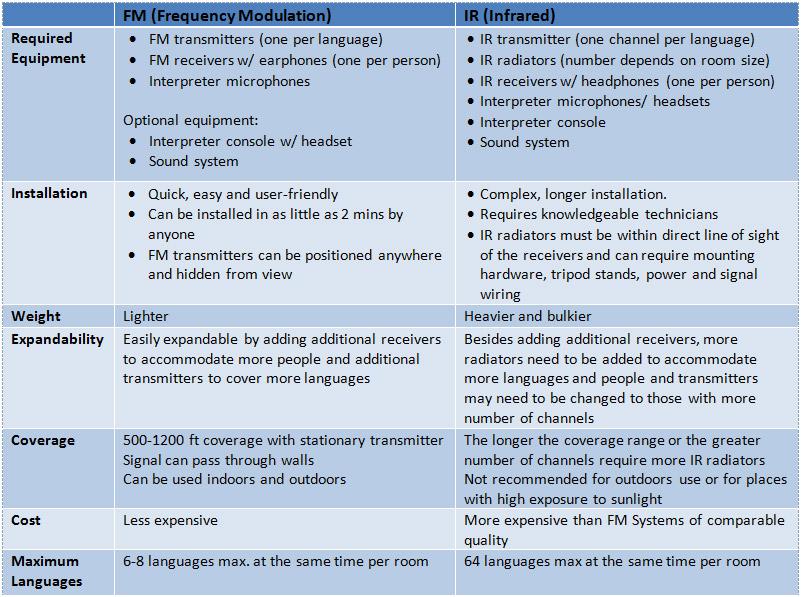 What is the difference between portable, battery-operated transmitters and stationary (also called table or base) transmitters?

What is relay interpretation?

Relay interpretation (also termed as Indirect or second-hand Interpreting) is used when more than two languages are involved in an interpreted event and no single interpreter commands all of the languages, or when no interpreter can be found in a given language combination. It is especially useful for rare or uncommon languages and in the multilingual meetings.

What are the differences among the Enersound push to talk conference microphone system, standard wired and wireless microphones?

How many push to talk microphones can I have in the Enersound CS-300 conference microphone system?